Your car’s suspension sits at the top of the critical-car-components’ list together with the engine, transmission and brakes. The suspension connects your car’s chassis to the wheels and in the process plays three critical roles. These are:

While modern vehicle suspension systems are designed to endure the stresses that come with performing these functions for a long time, they will eventually wear – and in extreme situations completely break down. That’s why it’s imperative that you consistently check the suspension system to ensure it’s working properly as a broken suspension could lead to a host of other car issues.

What is in a car suspension system?

Modern car suspensions comprise of numerous different parts and will vary tremendously from one vehicle to another depending on the design. They all, however, share certain major subsystems that cut across regardless of the varying design implementations. Some of these components are more susceptible to wear (and failure) than others. The main car suspension components are:

They are rarely considered part of the car’s suspension system but, in reality, probably are the most important parts of the entire system. Other than providing the traction needed for acceleration, cornering and braking; car tyres also provide the first cushion for absorbing small bumps and road imperfections.

All vehicles today, car or truck, have some kind of spring to absorb the larger bumps. Springs can come in the form of coil springs, torsion bars or leaf springs. Because they have to bend in response to the motion of the car, they can sometimes break when the car hits a large bump hard and will generally sag as they wear. They are, however, less prone to failure compared to most other suspension components.

Shock absorbers and struts are pretty similar, but a strut is a slightly “more advanced” shock absorber as it incorporates a coil spring within its structure. Struts and shock absorbers similarly perform the same function which is to dampen the spring’s movement and stop it from bouncing and oscillating.

Struts and shocks are filled with a thick oil that could leak over time due to wear or damage from accidents and impacts causing them to fail.

These include a variety of rods as well as other connecting pieces that together keep the car’s wheels in the right place relative to its body. Majority of the linkages in a car’s suspension are solid metal parts which makes them resistant to failure except in the case of a major accident. Linkages could, however, have bushings which would necessitate replacement of the entire assembly when a bushing fails.

Because suspensions are all about motion, various linkages will need to be connected using flexible connections. The connections include bearings and bushings – which allow slight twisting and sliding movements, often without the need for lubrication – and joints, which do require a lubricant for them to allow controlled movements.

Bushings (which are made of rubber) will generally degrade over time and fail eventually like other rubber parts. Joints also wear out with time causing them to get lose and eventually fail.

So, how do you tell whether your suspension system is broken or failing? 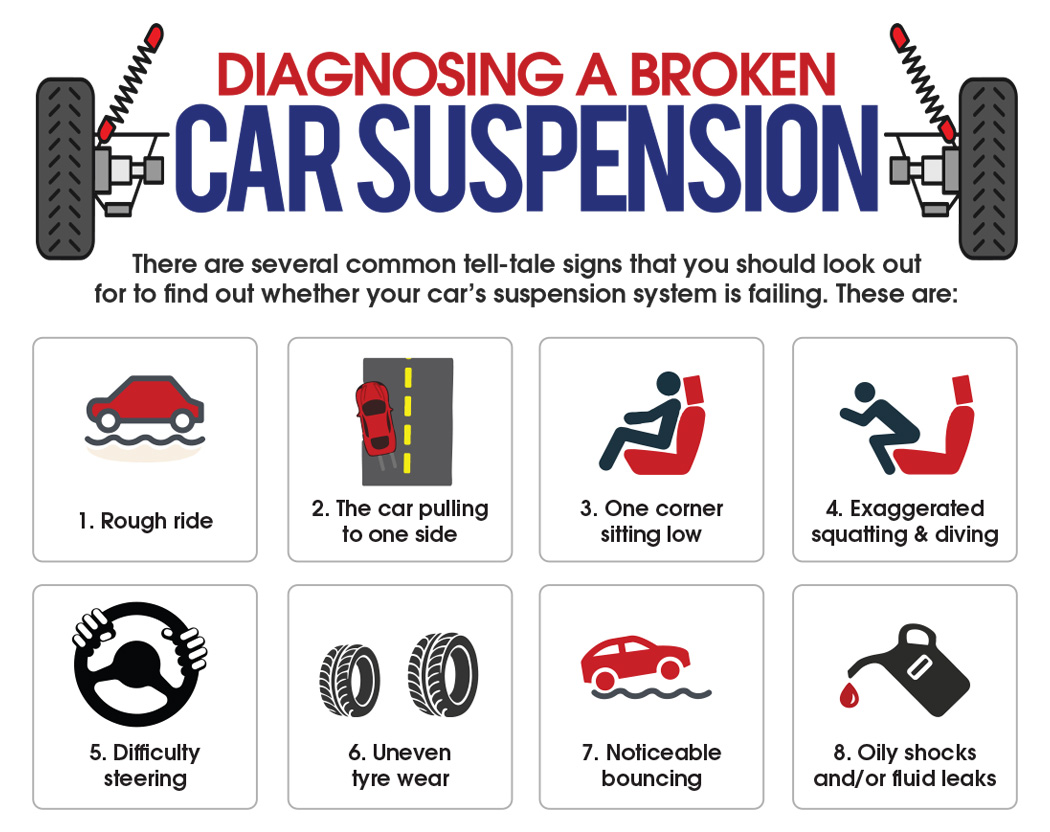 There are several common tell-tale signs that you should look out for to find out whether your car’s suspension system is failing. These are:

Looking for car suspension services in the Sunshine Coast?